Lesson 14: I have more celebrity crushes now than at 13.

This post is dedicated to my husband, my real-life hunk, who didn't think my last post was snarky enough.

Joel McHale.  Joel Kinnaman.  Ryan Gosling.  Channing Tatum.  What do these men all have in common?  They're hot.  They're rich.  They're unattainable.   Best of all, I'll never have to raise their children or cook and clean for them. 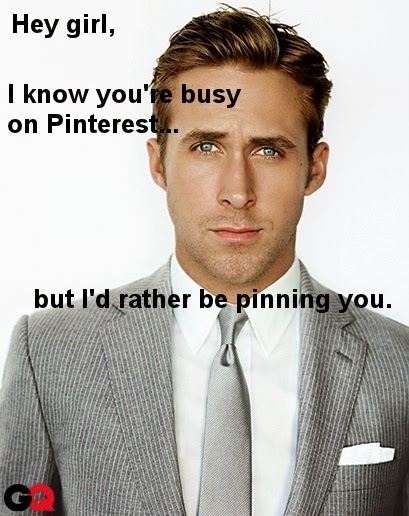 You see, lately I've been binge watching a lot of TV shows and movies on Netflix while falling in love with the leading men. Why?  My theory is simple.  The guys on the screen don't ask anything from me.  They are simply there to entertain me, to serve as eye candy, and to help me escape to a world where I am their sexy, carefree, childless costar.  I'm not alone. The thousands of hunky celebrity meme's on Pinterest prove it. (My favourite is the Gosling "Hey Girl" series).

Last night, I dreamed I met RoboCop (played by Kinnaman) at Walmart after purchasing milk, toast and Lucky Charms for my kids.  He told me he was surprised to run into me.  He was worried about me beacuse I hadn't been attending the Spanish class were both enrolled in at a local school.  I told him I was busy with mom stuff and couldn't make the class often. 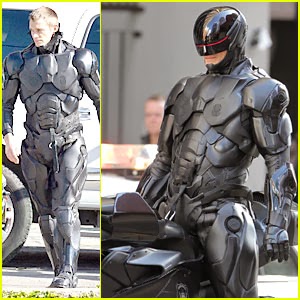 He then went on to say he was he interested in applying for a job at L'Oreal Canada.  He wanted to try a safer line of work.  Fighting crime in heavy armour was getting too risky. I admitted I had applied there about 10 years ago, and that it seemed like a great company to work for.  RoboCop seemed shocked.

I giggled and blushed like a little school girl.  RoboCop thought I was only 23!  Extra brownie points for him!

But what was supposed to turn into an R-rated dream suddenly fizzled out into a G-rated Disney movie, minus all the singing.   After RoboCop and I exchanged pleasantries at Walmart, he took me back to his place.  We were only hugging in the bedroom when I began to feel guilty about cheating on my husband and destroying our family.  Not only that, I also felt sorry for RoboCop's real life sweetie, Olivia Munn.  I didn't want her to feel jealous of us romping in his fancy apartment.

And then I woke up to reality.  Before I could even get to the bathroom for my morning pee, I heard my kids fighting in the kitchen over who drank their milk the fastest as my husband coaxed my eldest out the door for school.  I closed my eyes, trying to conjure up sexy RoboCop again but all I could think of  was the pile the laundry and dirty dishes waiting for me downstairs.  Ah motherhood.   You can never truly escape it.

Valentina
Valentina is a mom of two boys and a freelance journalist. She spends her days writing, reading, advocating for special needs kids, cooking, cleaning and driving people around. During her rare time off, she likes: watching Netflix, exercising and, most of all, sleeping. She also enjoys having the occasional glass of wine (or gin) in her pyjamas with her hubby.