Lesson 13: How to make a no-sew knight costume

I'm taking a beginner sewing class.  It's on Sunday afternoons with the talented quilter and owner of Deux Petites Souris.  My original motivation for enrolling was a desire to escape my family once a week.  Learning to operate a sewing machine was an added bonus.

But after just two classes, I have to say that I'm enjoying sewing more than I thought I would.  It is strangely satisfying and addictive to be able to create something with my own two hands.

Armed with my amateur skills, I set out to make my youngest a simple knight costume this morning. His daycare is hosting a medieval ball on Friday and the children will be dressed as knights, lords and princesses. I have to admit, I did not actually use any needles and thread for this project, but my newly acquired measuring and cutting techniques did come in handy.  (In my defence, I don't own a sewing machine yet, nor did I feel confident enough to attempt sewing something without my teacher's supervision!)

With a little patience, scissors, felt and adhesive, anyone can make this easy tunic and shield. 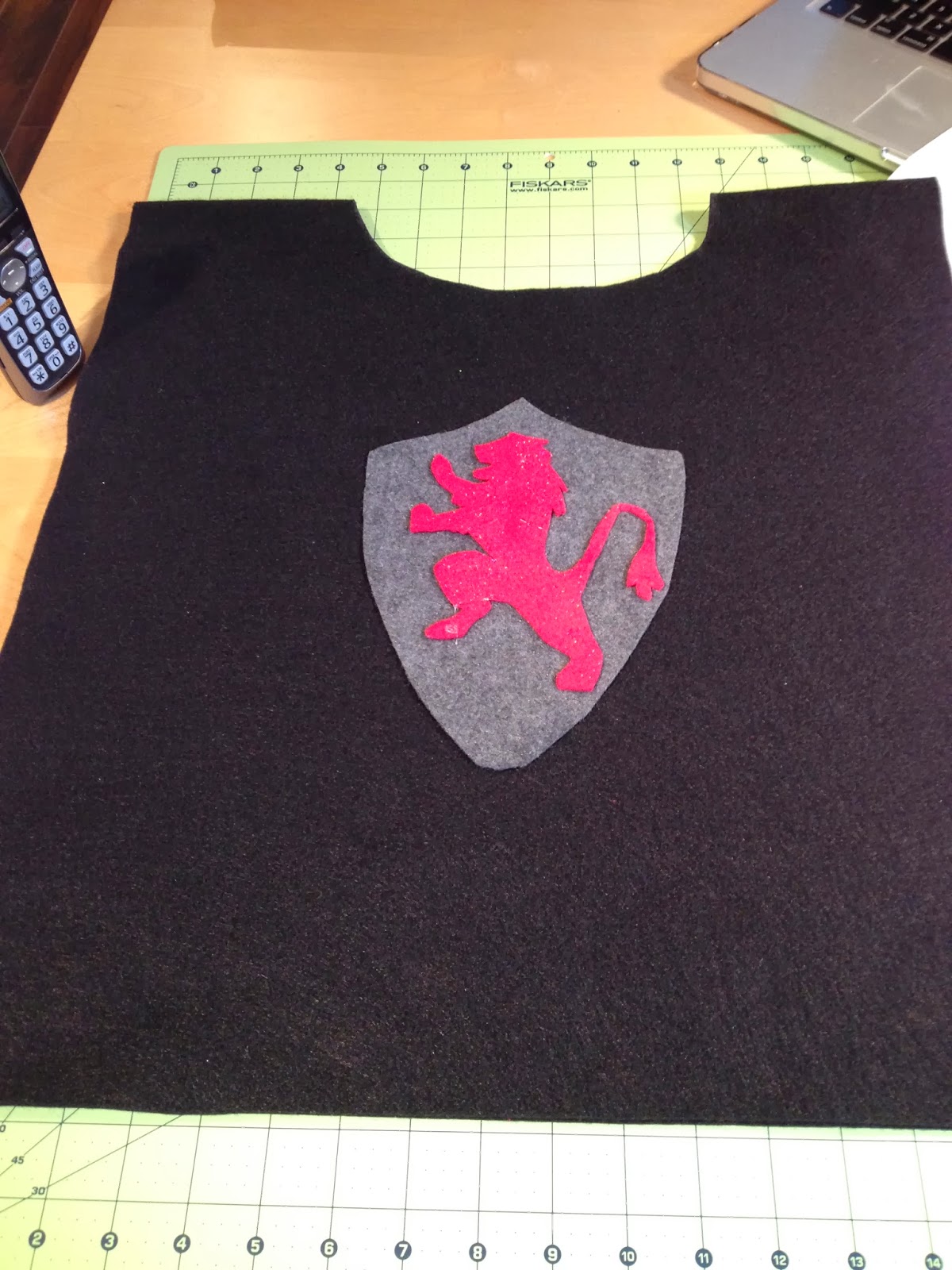 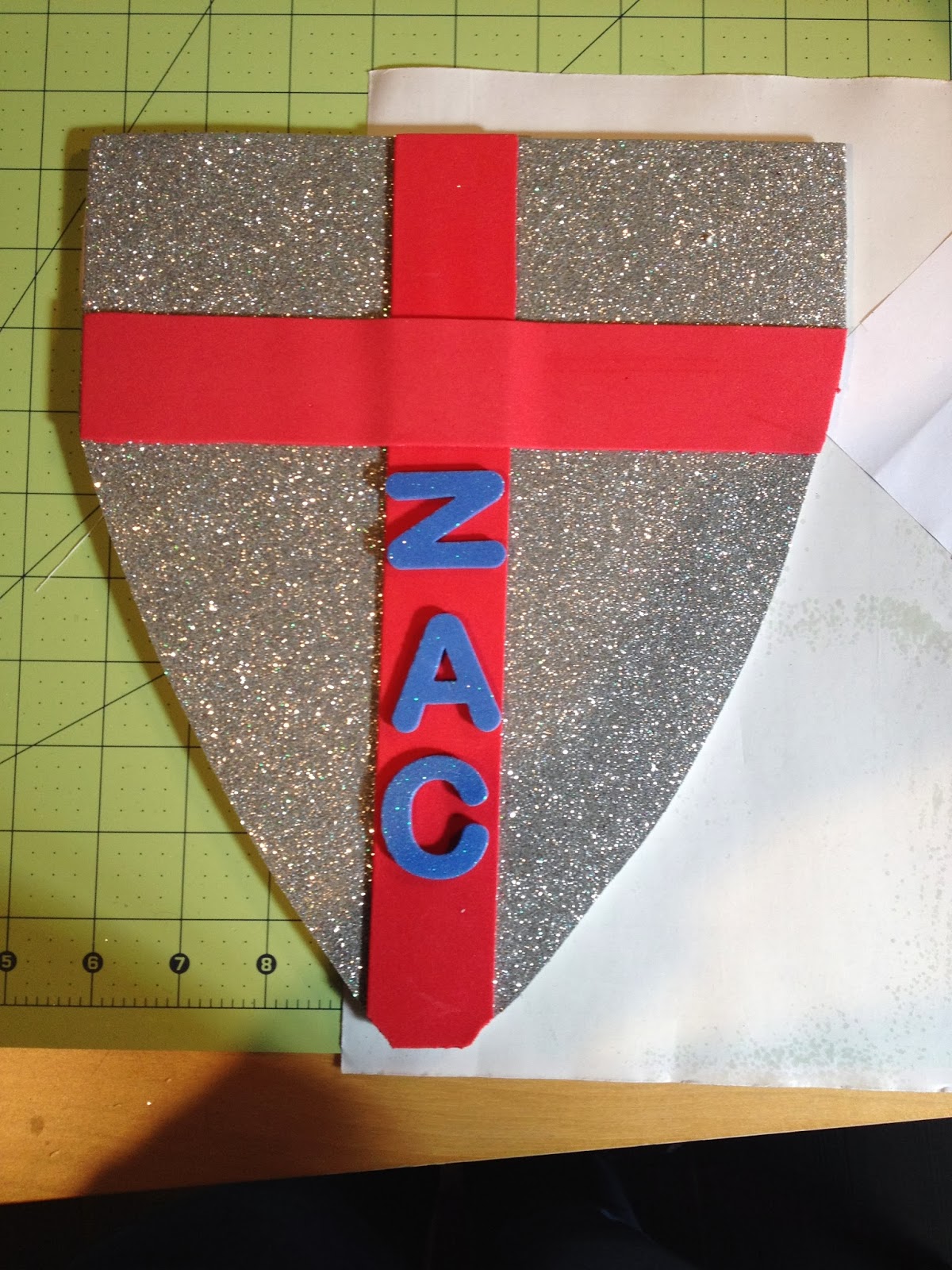 I started with a piece of black felt I purchased at the fabric store.  My son is tiny, so I cut a 24 by 40 inch rectangle to make the tunic.  (It's enough to cover his torso and his bum when finished.)  Then I folded the felt in half and cut out a circle to slip his head through.  Easy! 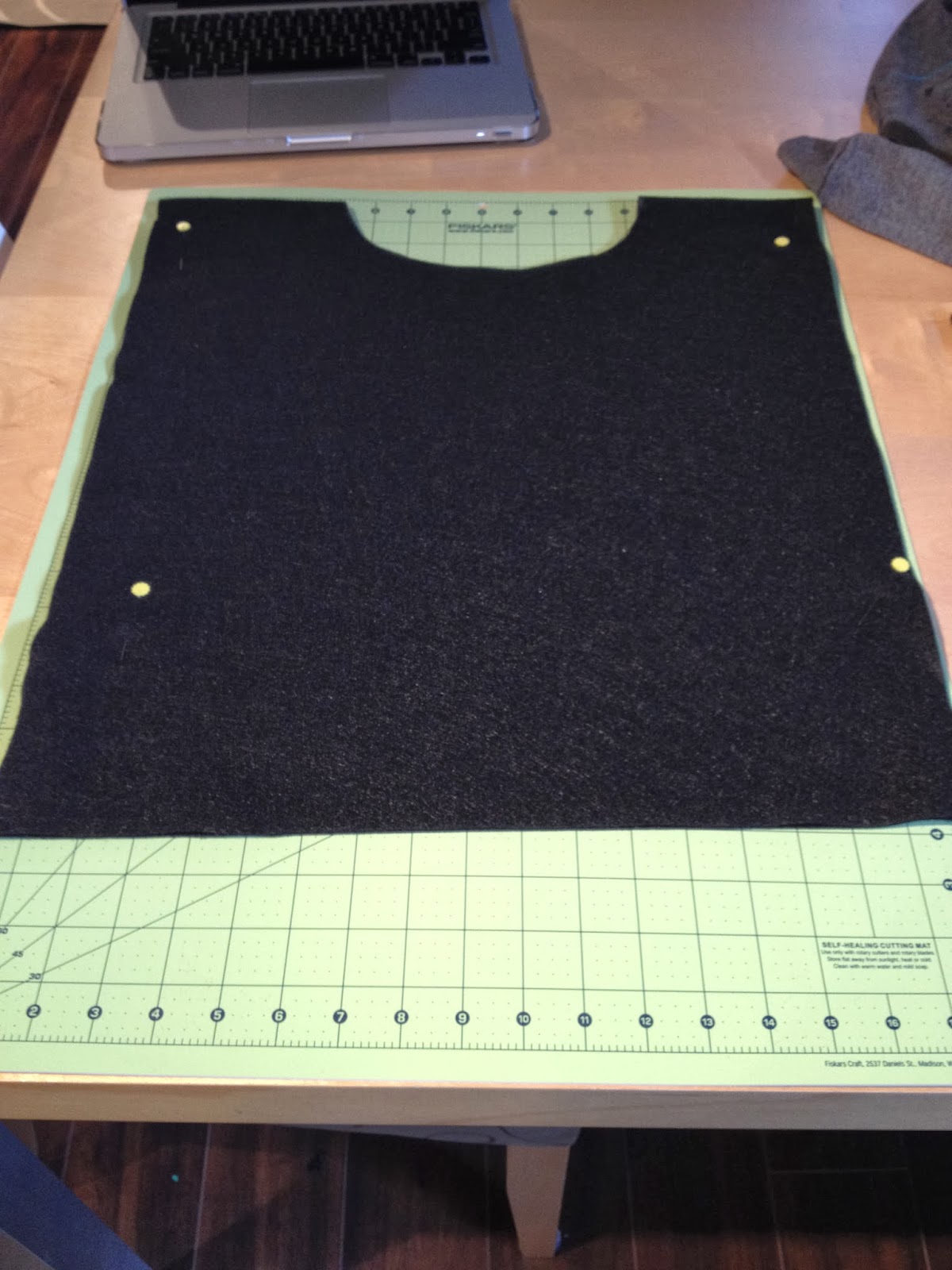 Next I cut a small crest shape onto a grey piece of felt. I used iron-on hem tape to fasten the crest onto the front of the tunic.  My son wanted a fierce, yet sparkly lion on his crest.  I found a lion image on the web and traced it onto some red glitter felt.  Then, I carefully cut it out and used hot glue to attach it to the crest.  Why didn't I just iron it on with the hem tape?  Well, apparently sparkly felt immediately burns upon contact with high heat.  I learned this the hard way when I tried to iron on my lion and melted it to a shriveled clump instead.  Wanting to avoid a potential fire, I chose the glue gun on my second attempt.  Although, a needle and thread could have worked for this step as well. 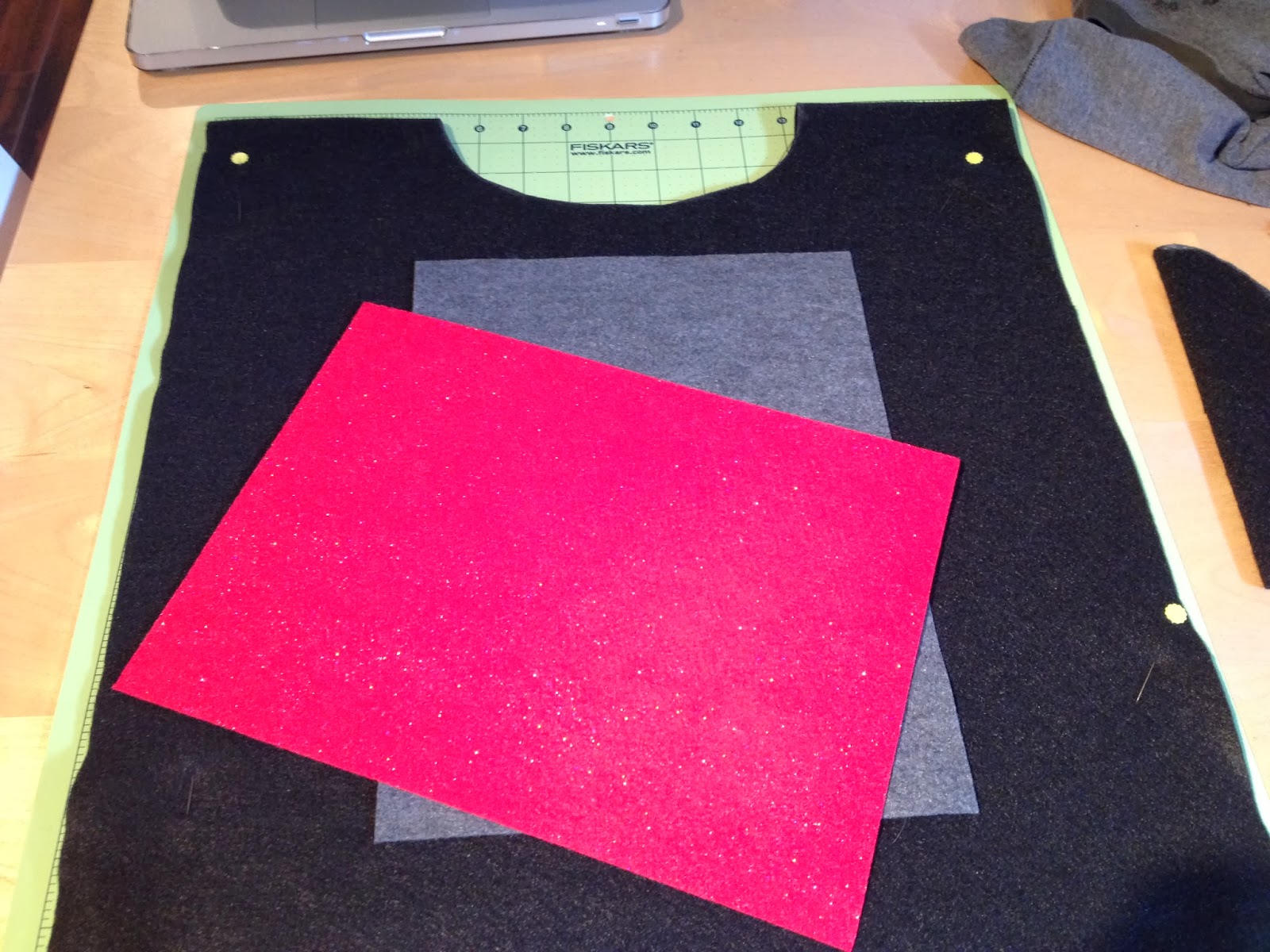 I used foam board for the shield.  I cut out the shape I wanted and covered it with silver glitter foam (Yes, my little one is obsessed with glitter.)  I cut out red foam strips to make the decorative cross.  Last, I added foam letters to spell out his name.  Did I mention they had glitter on them?  My lord is now ready for his ball... 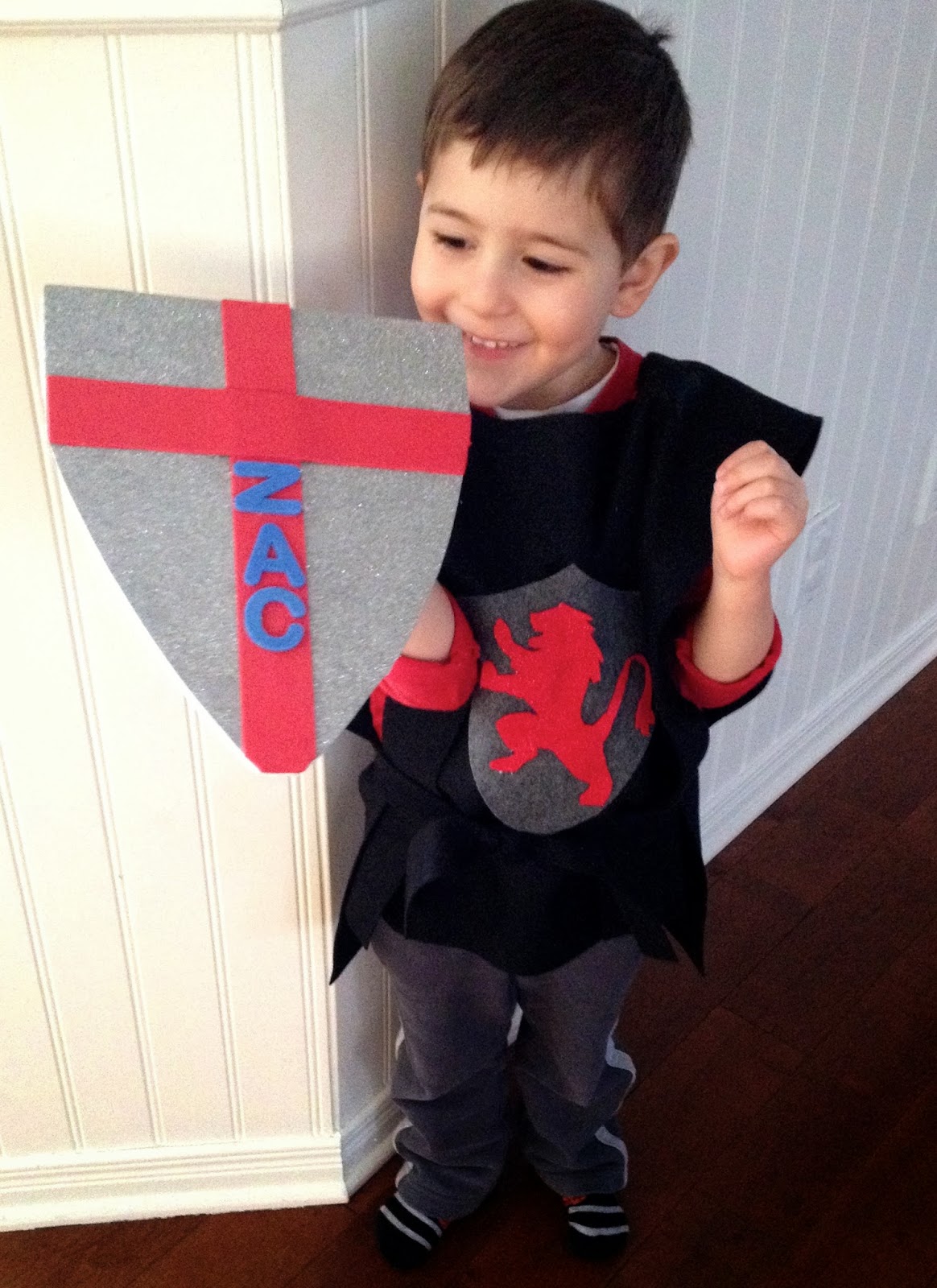 Valentina
Valentina is a mom of two boys and a freelance journalist. She spends her days writing, reading, advocating for special needs kids, cooking, cleaning and driving people around. During her rare time off, she likes: watching Netflix, exercising and, most of all, sleeping. She also enjoys having the occasional glass of wine (or gin) in her pyjamas with her hubby.